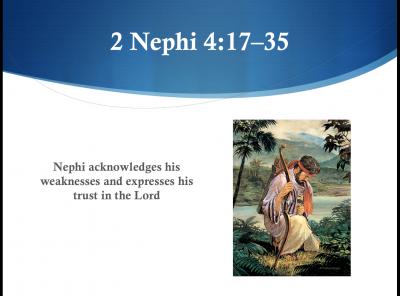 A 21-slide PowerPoint Presentation for the BofM Lesson 26: 2 Nephi 4

A 21-slide PowerPoint Presentation for the BofM Lesson 26: 2 Nephi 4

"After Lehi’s death, Laman and Lemuel became angry with Nephi “because of the admonitions of the Lord” that Nephi had spoken to them (see 2 Nephi 4:13–14). Troubled by his brothers’ attitudes and actions and by his own weaknesses and sins, Nephi recorded his feelings in expressive and poetic language. He described his love for the scriptures and his gratitude for the blessings and strength he had received from the Lord." [Introduction from the online lesson at lds.org]