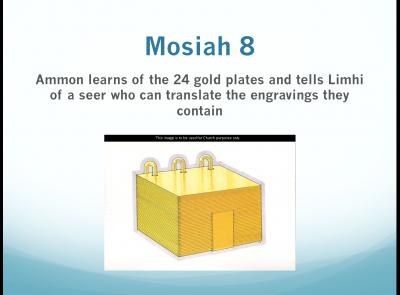 A 22-slide PowerPoint Presentation for the BofM Lesson 56: Mosiah 7-8

A 22-slide PowerPoint Presentation for the BofM Lesson 56: Mosiah 7-8

"Approximately 60 years before King Benjamin’s son Mosiah became king, a man named Zeniff led a group of Nephites from Zarahemla to live in the land of Nephi, which they considered “the land of their inheritance”. King Mosiah authorized a man named Ammon to lead a small group to the land of Nephi to learn the fate of Zeniff’s group. Ammon and his companions found the descendants of Zeniff’s group living in bondage to the Lamanites. Zeniff’s grandson Limhi was their king. Ammon’s arrival brought hope to Limhi and his people. Limhi asked Ammon if he could translate the engravings on 24 gold plates his people had discovered. Ammon explained that the king in Zarahemla, King Mosiah, was a seer who could translate those ancient records." [Introduction from the online lesson at lds.org]