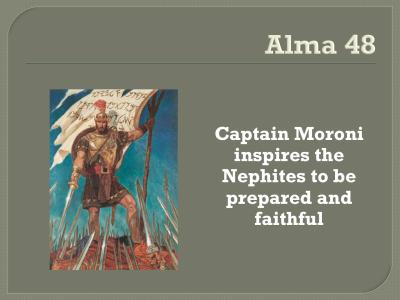 "Amalickiah helped convince the Lamanite king to command his people to go to war against the Nephites. Most of the Lamanites who were called to battle refused to fight the Nephites and appointed Lehonti as their leader. After being commanded by the king to lead the obedient soldiers to compel their brethren to arms, Amalickiah used treachery, intrigue, and murder to take control of the entire army and then to become king of the Lamanites. Meanwhile, Captain Moroni helped the Nephites fortify themselves against the attacks of their enemies so they could maintain their liberty and freedom of worship." [Introduction from the online lesson at churchofjesuschrist.org]