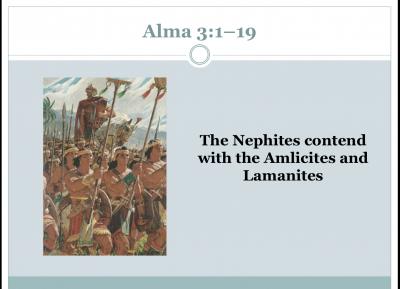 A 20-slide PowerPoint Presentation for the Seminary Lesson 70: Alma 3-4

A 20-slide PowerPoint Presentation for the Seminary Lesson 70: Alma 3-4

"After joining a Lamanite army, the Amlicites distinguished themselves from the Nephites by making red markings on their foreheads. The Lamanites battled against the Nephites, and by the end of the year, “thousands and tens of thousands” had died in battle. Following this battle, many Nephites humbled themselves and “were awakened to a remembrance of their duty”. About 3,500 were baptized and joined the Church. However, in the next year, many Church members became proud and began persecuting others. Concerned about this wickedness, Alma resigned from his duties as chief judge and continued to serve as the high priest over the Church. In this capacity, he planned to travel around the region, bearing pure testimony and calling the people to repentance." [Introduction from the online lesson at lds.org]