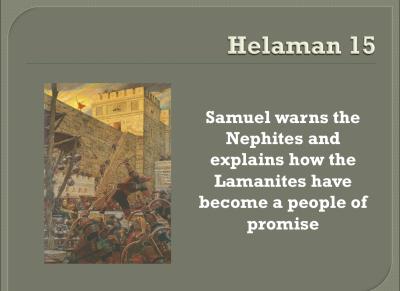 A 23-slide PowerPoint Presentation for the Seminary Lesson 115: Helaman 15-16

A 23-slide PowerPoint Presentation for the Seminary Lesson 115: Helaman 15-16

"Samuel the Lamanite warned the Nephites that unless they repented, they would be destroyed. He declared that the Lord would prolong the days of the Lamanites, who had become more righteous than the Nephites. Some Nephites believed Samuel’s teachings and were baptized by Nephi. Those who did not believe Samuel attempted to kill him. But Samuel was protected by the power of God, and he returned to his own land." [Introduction from the online lesson at lds.org]