It is the last day of the second week of 2017, and I committed to writing my next story before the end of the day, which is swift approaching!

I thought I would write about the beginning of my life in Oxford, Ohio, where my family moved when I was four years old.  I had been born in Monroe, Ohio, the youngest of four children.  My parents bought a lot and hired an architect to design a lovely contemporary home in a beautiful neighborhood in the sleepy college town of Oxford, home of Miami University, a 35 minute drive to the west. 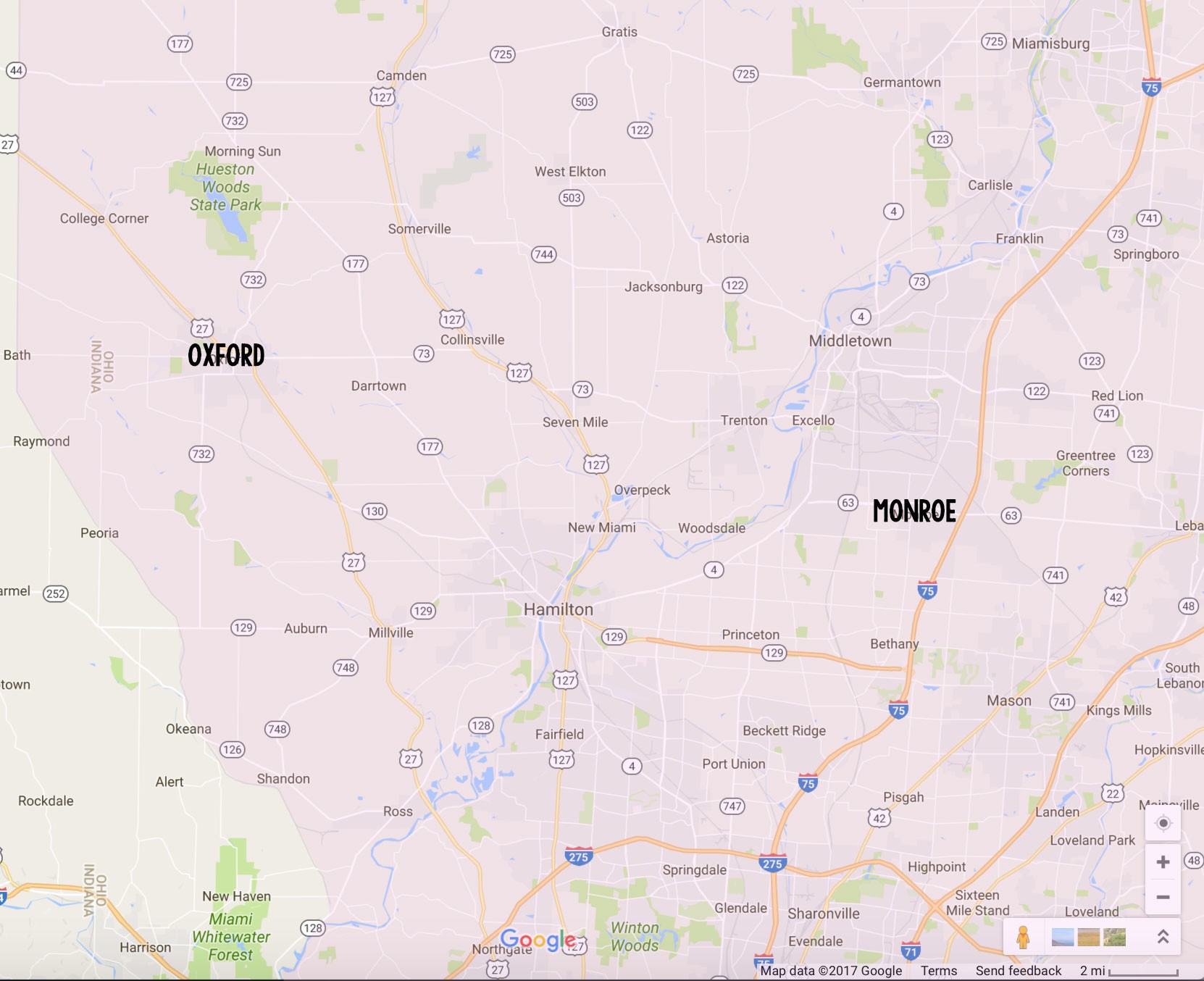 My memories are vivid, for a four year old, of the construction site.  The house was supposed to be finished in time for the start of the school year in 1962.  But, as is more often the case than not, the house was behind schedule.  The decision was made to start my older siblings at their new schools anyway, so their academic year would not be interrupted mid-term with a move to new schools.

Each day Mom and I would drive the other kids to the bus stop in our new neighborhood and they would board the bus and go off to school.  At least some of the time, we stayed at the construction site the rest of the day till the school bus dropped them off, and then we would all drive home to Monroe.  This went on till November when the house was done and we moved in.

Across the street from our house lived the Howenstein family.  They had children whose ages were close to mine and my sister Kathy.  Their oldest boy was a year older than Kathy, Dana, their second son, was a year younger than Kathy and a year older than me.  Heidi, their youngest, was a year younger than me.  They welcomed us into the neighborhood and Heidi and I became instant friends.  One memory I have of Heidi and I was playing in their back yard where there was a big tree that oozed an amber colored sap.  It looked like the soap in the dispensers at the church, so we pretended it was hand soap.  WHAT A MESS!  A delightfully pine-y smelling mess!

I soon became pals with all the carpenters, especially Big Red and Little Joe.  They had big metal lunch boxes and I would bring my lunch and we would sit down together and sometimes swap items from our boxes.  I loved the construction site.  I loved watching the house take shape, slowly but surely.  I remember when they installed the dishwasher - I can't remember how I managed to do it, but I got it to turn on when there was no door and water sprayed everywhere.  To this day I love to explore construction sites.  I love to draw up floor plans.  I think I should have become an architect.

Kathy and I were to share the largest bedroom.  It was not symmetrical, and I delighted to see there was a little nook on one side where a bed would go, and that is the side I wanted.  But, Kathy got first choice because she was older.  I felt it a great affront that I didn't even have a chance at the side I wanted. 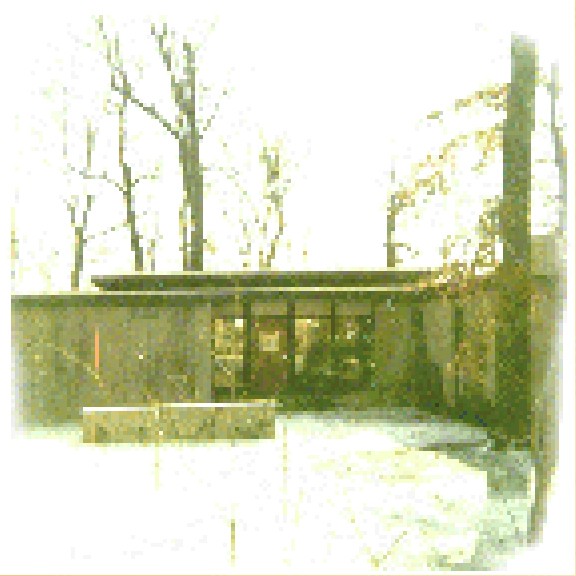 Here is a very grainy photo of the house from the front while we lived in it.

I think because I spent so much more time there than the other kids, before it was finished and also after it was finished, because they were all in school all day while I was at home alone all day for a year and then half a day my first year of kindergarten, I felt a great sense of ownership for this new house.  In contrast to being the last one to join the family in the previous house - I was the first one to discover all sorts of things about the new house.

There was a large tree in the driveway, right outside the carport that left just enough room to drive in or to back out to one side of it and then drive down the driveway facing forward.  But because it was really sort of in the way, and to protect that tree, a strong corrugated steel ring was placed around the base that was probably 10 feet across.  This prevented cars from hitting the tree.  There was like a 2.5" lip all around the top of the ring - the perfect width to become a balance beam for endless imaginary adventures.  The inside of the ring was about 10 inches lower than the driveway.  I got very good at walking around that ring without falling in the pit - which, of course, was filled with either "hot lava" or "alligators" or something like that.

We had a wooded lot and all the trees they had to cut down to build the house were stacked in huge wood piles in the back.  These wood piles were just more fodder for my imagination.  They became pirate ships or a fort to play on.

I could go on and on about this home, I LOVED it.  To this day, very often, my dreams are still set in this home.  Often I have dreams of purchasing it again someday.  In 1994, 14 years after I had last seen it, Mom and I took a big trip from Florida, up the coast all the way to New Hampshire and then across Vermont and New York and into Ohio, and finally to Oxford.  As we got to the neighborhood, we parked on the street and walked down the driveway.  So much had changed, but suddenly I saw a few odd things that hadn't changed at all.  One was the central air conditioner unit and the other was this silly little vent that opened into the basement where we used to have an oil burning furnace, and the oil truck would come every once in awhile and take a hose and stick it through that vent to fill our oil tank to heat the house.  That vent was just as it had been all the years I grew up in that house - and some how, it triggered such a powerful response in me - it was like getting knocked over by a defensive lineman - and I burst into uncontrollable sobs.  I can't really for sure explain what I was feeling.  But the owners heard me crying and came out and asked in trepidation if they could help us.  I sobbed out - "my parents built this house!" and the man said - "Oh!  Are you the Woodses?"  "Yes!" I choked out.  "Just a minute, wait here."  He went inside and then came out and said - "We would love to show you the house, if you could just give us a few minutes to straighten up."  So we waited until they came out and brought us in through the front door.  They were very proud to say that they had tried to restore the house to more of it's original state.  Well, it was not much like we had it at all.  But I felt that day, that my memories are SO vivid of that home - so rich and abundant - that even if it burned down, it couldn't be any more real to me than it already was in my head and heart.

I think in part the way I was feeling was recalling just how secure and happy I had been there.  How safe I felt, how much I belonged, how I knew every nook and cranny - how as the older kids left home one by one, I would take over their space, spreading out into all the bedrooms till it was more like my grand wing of the house than just my room.  I don't think any of the others, except my dad, loved that house as much as I did.  I have no expectation of ever feeling that way again in this life.  Even though in years, I may live some place as long, it never will mean what that house meant to me.

Here is a more recent photo of it from Christmas Day 2004:

That was the corner of the house where my room was.  They changed the flat roof to a pitched roof.  They changed the plate glass windows to regulation sliding windows.  The brick is the same, trim colors very similar.  It still chokes me up to see it.