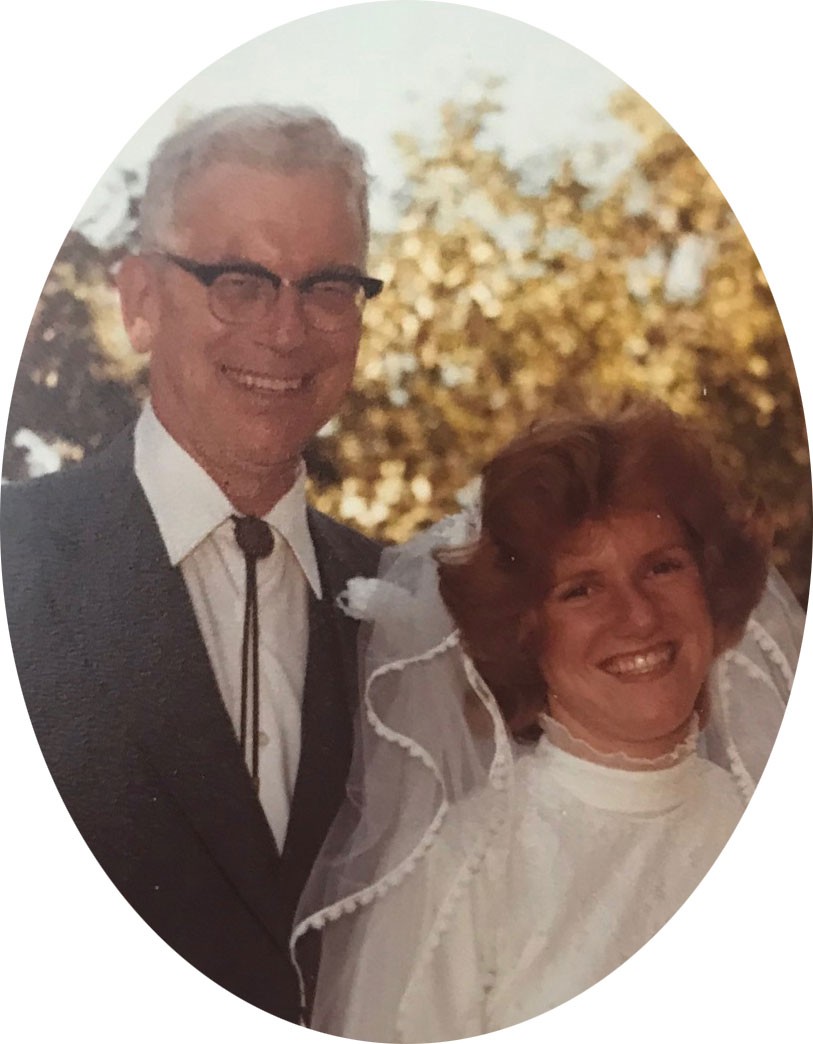 This is hard to write.  I have to acknowledge something that is bewildering.  I knew a long time ago that during my teen years I had been disrespectful, resentful and even critical of my father, and that I had been wrong to do so.  I chalked it up to being a teenager.  When I joined The Church of Jesus Christ of Latter-day Saints at age 16, I had an about-face in regards to my father.  It wasn't instant, but that's when it started.  He died of cancer at the age of 61, when I was only 22 years old.

My mother died in my arms of cancer when I was 43, after spending the final 10 years of her life living with me and my two sons.  After her funeral a conversation between me and my siblings revealed just how differently we thought of our father.  I objected to their harsh criticism of Dad, like he was pretty much to blame for everything wrong in the entire universe, to which my brother replied, "Of course you don't agree.  No one would expect you to agree. You had a different experience with him than us."  That was veiled for, "He spoiled you rotten."

I was and am still the youngest of four siblings.  I wasn't there to see how they were treated, or I was too little to pick up on it, and I have relied on their retelling of just how strict he was, how spoiled I was by comparison.  The story of the "brussel sprouts" my brother refused to eat and had to sit at the table till he did - for hours - only to throw up when he finally took a bite around bedtime, while years later, I was coddled when I complained about peas (or any of a number of foods I was repulsed by as a kid), and Dad would separate out three peas and smilingly encourage me to "eat just 3", was repeated many times to me.

So I shut up.  My brother was right, I guess.  Had I been treated like that, I'd hate Dad too.

It took years before I realized he was not quite right. He may not have realized that I had been judgmental about Dad from adolescence till college.  A series of incidents after I left home at 18 began to change my view of my father.  Had those incidents not happened, I most likely would have kept my resentments and disdain for good ol' Dad as they had.  I realized it was not really about how he treated us or anything else about him that we resented him.  I wasn't sure what it was, but we all became critical, even angry toward him as teenagers and into adulthood.

Well, this is the hard part of the story.  It wasn't until about a year ago that I saw some things I'd never picked up on before.

I could go into greater detail, but that isn't the point.  What I finally see, what I never wanted to see, was that Mom had issues and we were all her victims.  I never knew anything about mental illness but what was depicted on TV - not in everyday families all around me.  Not at MY house.  But now I know it was a well-worn inhabitant in our home.  So familiar I didn't know it was "a thing."

Now, due to a number of relationships I've had over the years and my research into mental illness, I see it, and all the ramifications of it as it influenced all our relationships and our self-images and coping skills.  And it is profoundly disturbing and very very sad.

Both my parents are gone along with all their siblings. That generation has gone on without detailing their secrets.  But those secrets, their sufferings, are hidden in veiled memories at best, and still impact subsequent generations on and on.

Piecing things together, well, it is a lot of guess work on my part, because I have a personality that cannot let things well enough alone.  I NEED to understand.  And with no one to ask but God, I feel I am often guided to answers.  They are like missing puzzle pieces.  Finding the piece is one step, but fitting it into the right spot on the puzzle is a whole other step and can take years.

I've asked my deceased parents and grandparents for help.  And I truly believe they have helped me.  Along with others I can't identify.  Along with old records in my possession and ones I find while researching family history online. One little piece of the puzzle after another.

I am certain that Mom inherited not just brown hair from her ancestors, but generations of unresolved issues, besides any traumas she faced during her mortal life.  I've heard it said that when a person heals from inherited trauma, (see here also) it heals those who carried those burdens before.  I don't know, I'll have to wait and see for myself when I get to the other side, but it would be nice to think that is possible, and is more incentive to heal myself, or accept the healing power of the atonement, to benefit the generations I owe my very life to.

I know I carry on many of my mother's traits and ways.  Some I am damn proud of - she was truly amazing in so many ways.  Others, I hope to overcome. 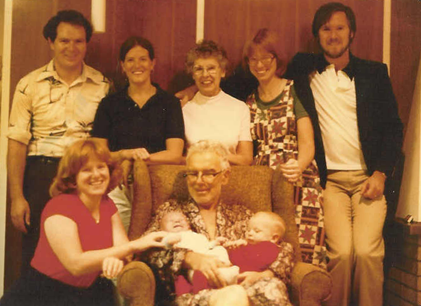 If fathers are disrespected these days, and there is no question they are, how much of it is because their wives did not respect them?  I discovered much about my father when I was back home in Ohio just prior to and for several weeks after he died. Things he didn't talk about and Mom certainly never did. National engineering awards he won, files he kept on all his kids, correspondence and commentary by others who highly respected him.

Here is a picture of my family in our Oxford, Ohio home just days before Dad's death.  Just shy of a year since the one on my wedding day above.

He is holding his third (Alex Woods) and fourth (Billy Andrus) grandsons. I am kneeling next to them. Mom is right behind Dad, Judy to the right of her and Bill next to Judy. Chris, my husband at the time, and Sherrie, Bill's wife at the time are standing behind me. Kathy was having a baby right about then in Utah, so wasn't able to come before Daddy died.  He aged 20 years in a few weeks with the cancer and chemotherapy.

Probably the last day he was conscious or at least able to move or speak or even open his eyes, we had a little visit and when my mother came in and asked what we were talking about, I said we'd talked about Charlie Taylor's deep sea fishing trip.  But Daddy, with the last ounce of strength he had, patted me on the arm and said in a rasping whisper, "and she told me she loves me."  That is a sweet memory I own and it has blessed me ever since.  I knew that Daddy knew I loved him.

A couple months after his death, I had a dream that was an answer to prayer.  I relived the day of his funeral, except, he was there.  I saw several scenes from that day that actually happened, but he was there watching, and only I could see him.  He spoke to me and said, "everything is fine."  He was my height.  He had a look of transcendant peace on his face. Finally in the late afternoon, early evening, while we were out on the back porch, he said it was time to go and he walked off into the trees and disappeared.

I know Daddy IS fine. He has come to me in many ways over the years with love and support and messages he wanted me to have. One was to never leave my mother alone, since he was no longer there to take care of her.  So I followed through.

Well, I'm blubbering now.  Time to go - so I'll just walk out into the trees - disappearing is sounding rather lovely.