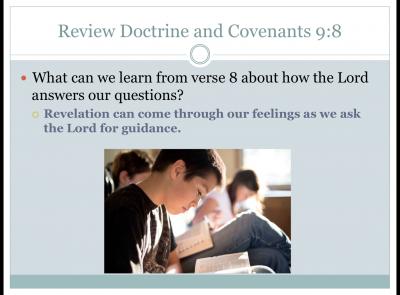 A 27-slide PowerPoint Presentation for the Seminary Lesson 17: D&C 9

A 27-slide PowerPoint Presentation for the Seminary Lesson 17: D&C 9

"In April 1829, Oliver Cowdery was also promised that he could have the gift to translate. Later, Oliver was instructed on receiving revelation in the translation process, and he attempted to translate. Although he apparently started well, he did not “continue as [he] commenced”. The Prophet Joseph Smith received a revelation explaining why Oliver’s efforts to translate had not been successful. In the revelation, the Lord said that it was no longer expedient for Oliver to translate. The Lord also gave additional counsel on receiving revelation." [Introduction from the online lesson at lds.org]