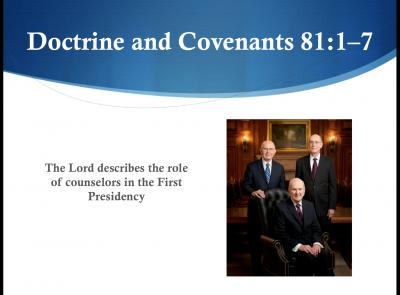 A 21-slide PowerPoint Presentation for the Seminary Lesson 84: D&C 81

A 21-slide PowerPoint Presentation for the Seminary Lesson 84: D&C 81

"On March 8, 1832, the Lord called Jesse Gause and Sidney Rigdon to serve as counselors to Joseph Smith. One week later, on March 15, 1832, the Lord gave the revelation recorded in Doctrine and Covenants 81. In this revelation, He described the role of counselors to the President of the Church and outlined blessings for those who are faithful in their ministry. Jesse Gause did not remain faithful, and the Lord called Frederick G. Williams, whose name now appears in Doctrine and Covenants 81, to take Brother Gause’s place in the Presidency. At the time of this revelation, the President of the Church and his counselors were called the Presidency of the High Priesthood. Beginning in 1834, revelations referred to the President and his counselors as the First Presidency." [Introduction from the online lesson at lds.org]