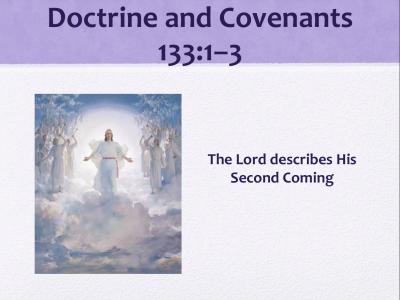 "On November 3, 1831, two days after the Lord directed Joseph Smith to publish the Book of Commandments, the Prophet received the revelation recorded in Doctrine and Covenants 133. This revelation was included in the 1835 edition of the Doctrine and Covenants as section 100 and was designated as the book’s appendix. Those who were working with the manuscript originally intended the revelation to be a bookend with section 1 to the revelations included in the 1835 edition. The revelation will be divided between two lessons. This lesson discusses the Lord’s command that His people prepare themselves and others for His Second Coming. It also discusses prophecies of events associated with His Second Coming and millennial reign." [Introduction from the online lesson at lds.org]