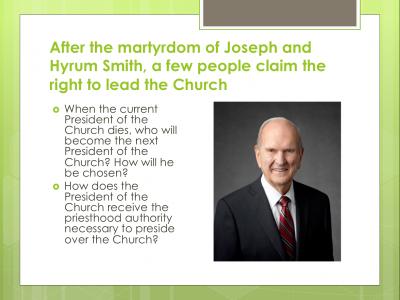 A 28-slide PowerPoint Presentation for the Seminary Lesson 146: Succession in the Presidency

A 28-slide PowerPoint Presentation for the Seminary Lesson 146: Succession in the Presidency

"After the martyrdom of the Prophet Joseph Smith and his brother Hyrum on June 27, 1844, some people were confused about who would lead The Church of Jesus Christ of Latter-day Saints. But before his death, the Prophet had prepared for this transfer of leadership by conferring all the keys and powers of the priesthood upon the Quorum of the Twelve Apostles. When Brigham Young, who was the President of the Quorum of the Twelve Apostles, spoke to the Saints on August 8, 1844, many Church members received a spiritual witness that he had been called and prepared by God to lead the Church." [Introduction from the online lesson at lds.org]